Technical and engineering drawings/graphics are a bit more cumbersome or involving than artistic drawings because they require the use of terms, symbols, and rules that are somewhat universal, and which knowledgeable people can understand and use in communicating.

Practitioners of both technical and engineering drawing have done a lot of work over decades to harmonize terms, symbols, and rules universally, and in such a way that drawings made or produced in one city can be sent to another city, and understood by other people who can assembly the drawings and manufacture objects that were made or drawn somewhere else.

Standardization has made it possible to interpret one drawing in different parts of the world, no matter the language used; basically, drawings have only one interpretation. For well over 100+ years, a lot of countries set up committees on standardization in order to accomplish this goal.

Usually, committees decide on very important factors such as the best methods that could give the clearest presentation of drawings, dimensioning, symbols, and allowances (tolerances)—amongst many others.

In addition, diﬀerent line styles are considered, adopted, and used to represent visible or hidden lines, and also indicate the centers of different objects, shapes, and features. If a single interpretation is desired globally, then the rules of standardization must be strictly adhered to and correctly interpreted.

Various countries have organizations, bodies, or committees that have shaped how technical and engineering drawing is practiced. Just to name a few—the British Standards Institution (BSI), established in 1901, was the world’s first national standards body; in the United States, technical and engineering drawing standards are established by the American Society of Mechanical Engineers (ASME); while Canada has the Canadian Standards Association (CSA). Generally, across the globe there exist several other organizations or bodies; all of which we won’t be able to list in this article.

The British Standards Institution (BSI) has done a lot of work and published approximately 20,000 standards. Every year it issues around 2000 new and revised standards that cover new materials, emerging processes, and technologies. In addition, it keeps the technical content of existing standards up-to-date.

Generally, members of organizations, bodies, and committees from many countries are part of the worldwide committee on standardization, which is popularly known as the International Organization for Standardization (ISO), and made up of national standards institutes from large and small countries which have different standards of living: basically, industrialized, or developed.

ISO develops technical standards that add immeasurable value to all types of businesses that use technical and engineering drawing; furthermore, it makes development, manufacturing, and supply of services and products much more efficient and safe and also makes trading easier and fairer between countries that don’t use a common language.

Although a lot of work has been done in the area of standardization, there are still certain areas of drawing practice that national standards have not yet been established for; for example, simplified drafting. In such a case, practitioners and authors have adopted certain practices used by leading industries, especially in the United States.

A complete and comprehensive understanding of an object cannot be acquired by using only one pictorial view because many details of the object won’t be expressed, and may be hidden or not clearly shown if the object is viewed from only one side or direction. Because of this, any practitioner or drafter must express an object through a number of views of an object from different directions or axes. Views, such as top view, front view, and side view—either right or left—and so on, are employed in drawings in order to project one view from another, as shown in the figure below. 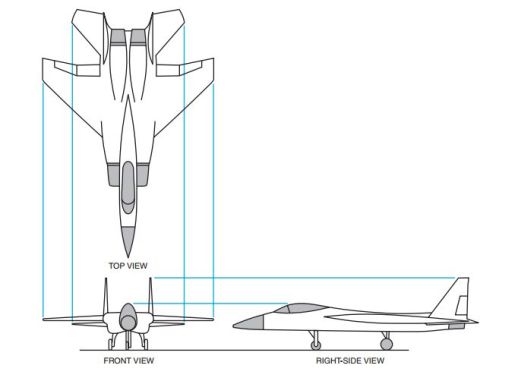 Orthographic views of an airplane

8 thoughts on “The Importance of Standardization in Technical & Engineering Drawings”

Most Viewed Posts & Pages of the Day